When Furnaces Fight Back.. Puff Back Happens! 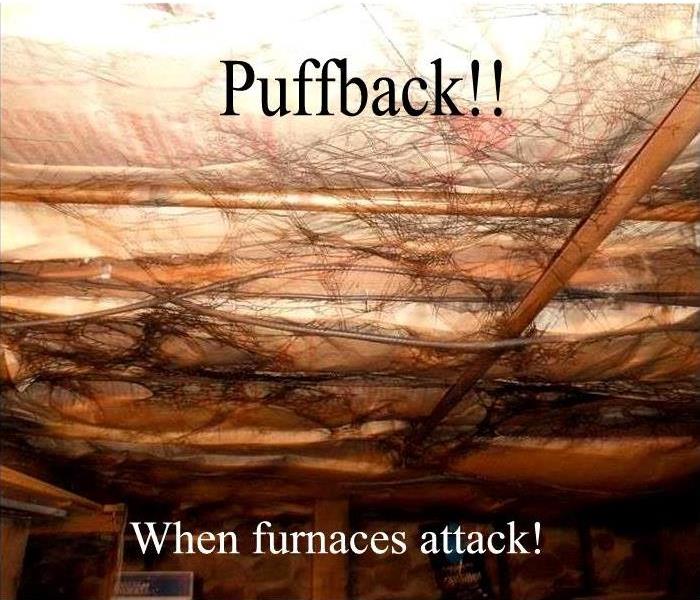 Furnace puff back is a messy and potentially dangerous event in which smoke and soot are released into the furnace.

Puff backs often result in oily black "webs" of soot being distributed throughout the house, requiring extensive cleaning and sometimes professional restoration to clean up.

To better understand puff backs you should know what causes them and how they can be prevented.

Puff backs occur when an oil-burning furnace doesn't ignite when it should. Oil vapors build up in the ignition chamber, causing an explosion when the igniter finally triggers. The explosion blows soot and other debris through the furnace's exhaust system and into the heating system, which carries it into the house. If the furnace is connected to a forced air heating system, the ducts can carry the puff back to every room of the house with an open vent.

Puff backs are caused by problems with the furnace, which leave oil in the ignition chamber that doesn't get burned. This can be caused by leaks in the oil system, bubbles in the oil line which expand and press oil out of the oil burner nozzle, the shutdown valve on the oil burner nozzle not working properly or a clog in the nozzle. Each of these problems can result in oil leaking out of the nozzle and into the combustion chamber when it isn't in operation. Oil will accumulate in the chamber until it finally ignites with a puff back explosion.

Most oil-burning furnaces in danger of having a puff back give off warning signs that should indicate a problem with the furnace. Black soot on the furnace, walls or ceiling indicate that oil is burning improperly in the furnace and is leaking out of the unit. Noises such as those made by the combustion chamber while it is burning may continue after the furnace has stopped, indicating that something is still burning within the furnace even though it shouldn't be. Noises at the beginning of the burn cycle, such as a puff or bang, also indicate that unburned oil has pooled and ignited.

Preventing puff backs in oil-burning furnaces is largely a matter of performing regular maintenance on the furnace to keep it in proper operating condition. Oil-burning appliances should be cleaned and serviced once per year, ensuring that the service person opens the unit and inspects it for signs of problems or damage. Inspect the furnace periodically for signs of oil leaks, paying attention to any odd smells or soot in the furnace room. You should also look for debris in the flue vent connector which could also be a sign of problems with the furnace.